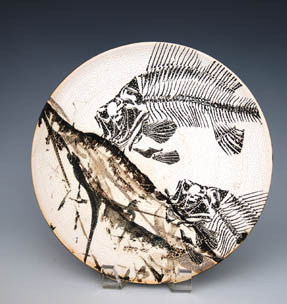 I am pleased to tell you that we have had a number of artists join our family of CerPrint 3500 users. I’ve helped them get the printer set up properly, which we’re going to discuss here. I’ve also advised about application tips for successful decal printing and firing.  I am also learning from them.

Just to backtrack a bit, the CerPrint 3500 was engineered specifically to produce a true black fired decal image. We have a number of accessories that are available with the device that come into play, depending on what suits the way you want to use ceramic decals.

Bearing in mind the black ceramic toner for the 3500 does not contain a flux and that the image density or “blackness” can fade at higher temperatures, just like many pigments, we came up with what we think is a better and more economical way to do it. The pack of decal paper we provide with the printer contains a flux. It works similarly to overglaze paints. Artists print a sheet of decals using  the printer driver on their Mac or PC. They cut out the decal, soak it, then transfer it to a piece. We often use the mirror image print feature because the decal is applied toner side down, rather than toner side up. While not absolutely necessary for graphic images, this is especially important when creating ceramic decals with text. When fired to the proper temperature, the result is a rich, deep black image with a hard, clear, glossy vitreous coat over the image. It’s food safe, and completely impervious.

Before we get too much further down this road, I want to point out what every ceramic decal user knows. It’s all about image quality. The first contributor to high image quality with the CerPrint 3500 is the True Black Ceramic toner. The pigment-saturated formulation ensures that a uniform layer of black ceramic pigment remains when the organics burn off during firing.

The second contributor is the digital image. It’s the old garbage-in/garbage-out adage. If the original image is low resolution, the result will be a poor-quality fired decal image. We recommend artists render their computerized images in the highest resolution possible,  at least 600×600 dots per inch.

The third contributor to image quality is the printer. The CerPrint 3500 is configured to optimize the resolution of the printer. We install it, using the standard Ricoh printer driver, as a Postscript printer. In the driver settings we then then select a resolution of either 600×600 or 1200×1200 dots per inch for the print job. The 1200×1200 setting instructs the printer to render the image at a much higher resolution, resulting in more pixels per square inch than the lower resolutions. Just to run the numbers, if you’re printing at 300×300, an 8.5×11-inch page, if printed entirely in black, contains 8,415,000 pixels. At 600×600, that number increases to 33,660,000 pixels. At 1200×1200, it jumps to 134,640,000. The result is smoother edges, greater image detail and greater black fill. Note that the printer will print a bit slower at this resolution, because it has to crunch a large amount of graphic data to render the higher resolution image.

This is one reason why it is so important that the printer/printer driver is installed properly. Additionally, there are special internal settings that are triggered when the correct paper type is selected from the driver menu.  The user manual takes you through the steps for both Windows and Mac environments.

In my next post, we’ll talk about other critical factors in printing good decals, and why the CerPrint 3500 is set up to give you solid control over these factors.