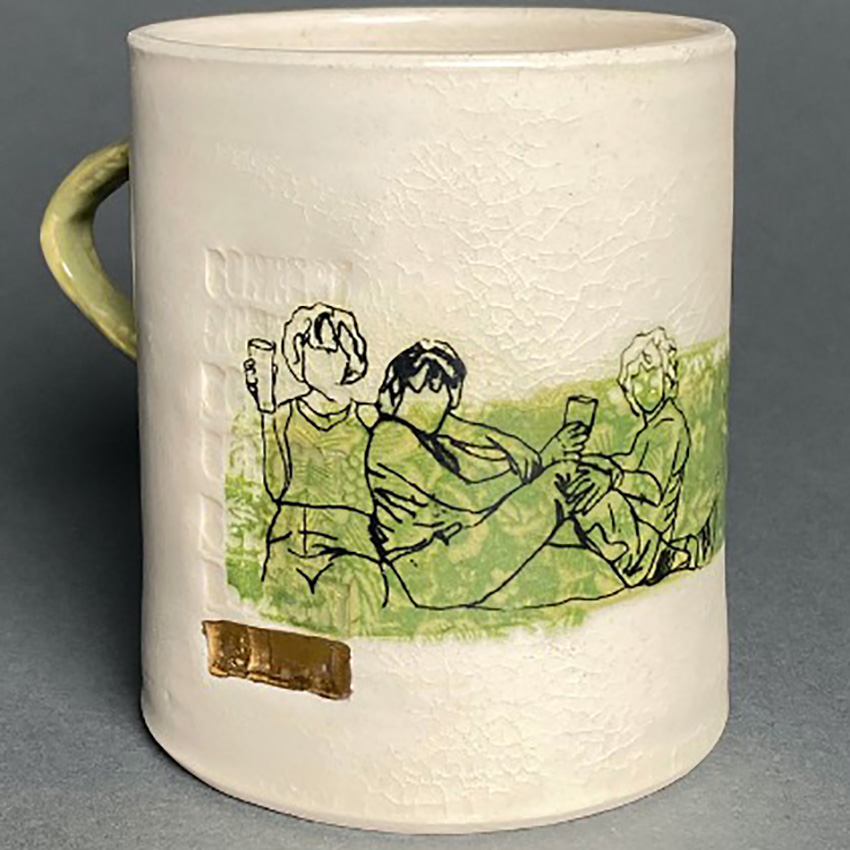 As an undergraduate at the University of South Dakota, I was exposed to sepia decals as a way to add my photographs to my ceramics. They didn’t do it for me. I wasn’t really jamming with the brown shades. When I came to graduate school at Kansas State University, I leaned I could re-fire a pot as many times as I want. It was kind of an “oh duh” moment. I’ve been experimenting with more layers and overlapping new CerPrint black and other decals using various firing temps and different papers. The technology expansion is just wild right now.

I’m answering questions. Can I fire color and black decals at the same time? Still working on that one. Can decals be put on soda or atmospheric work? Yes. When I do, they’re not clear. I get a yellow tinge. I’ve tried firing things in a different order. Sometimes I start with high fire and then move to a lower temperature with each firing. I add narratives on my pots and put decals over assorted colors of slip.

Sometimes I have a texture or stamp. I’ve experimented with putting the decal over the textures. I have to make sure I get all the bubbles out so it fires. The decals stick to all the holes, valleys and textures of the pot which is really cool.

My major works right now are autobiographical. I’m trying to uncover and connect memories from a six-year period of my childhood. I don’t know if it’s forgetfulness or trauma that I need to uncover. Certain fabrics will stir a memory, but I don’t remember where I was or what I was feeling. I hand trace old family photos and photos from that era, scan them and print them onto decals. Layering images from that period can evoke memories for me.

I love to soda fire in a soda kiln in cone 10 (2350 degrees Fahrenheit) or I will electrically fire to cone 6. Soda allows atmospheric processes to create a gray or other background. For electric firing, I use underglazes to evoke a memory. I use lower firing glaze around cone 4 or 6 for detail lines or chaotic drawings. Then I add decal photos of my parents, photos of objects I grew up around, family. I fire these to cone 010 or use the CerPrint one-step paper following the recommended firing procedure. I layer over that with mother of pear lusters or gold lusters and fire to 018. The CerPrint layer is usually the third or fourth layer. I could try to draw it out, but CerPrint lets me use an actual photograph. The crispness of the lines is so great. It’s up to me to draw, scan it in, or mess with it in Photoshop to get the exact look I’m going for. When I print it on the decal printer it looks exactly the same as my original. It’s very consistent, which I like. There’s no shrinkage. I know exactly how it’s going to look and you don’t get a lot of that with ceramics. You think you know how it’s going to look, and then something can go wrong.

I love that CerPrint decals are food safe after firing. Mine have even held up after the occasional run through the dishwasher.

If you’re interested in decals, it’s a really simple way to get into ceramics design. Once you have the printers and a kiln then you’re set up for life. It’s all really user-friendly and so consistent when so many things in ceramics aren’t. You can use the decals for big blocks or more delicate designs. I know exactly what’s going to happen when I load the kiln and unload the kiln. It’s customizable. I can draw my own art or pull it off the Internet. I’m excited to experiment with CerPrint blue in the future.

Shea Kister is a second year ceramics grad student, teaching assistant and instructor at Kansas State University. She became a ceramic artist during her sophomore year at University of South Dakota after taking a ceramics class. She began using decals to combine her photographs onto her ceramic pieces. Shea studies ceramics with minors in art history and psychology. She has an undergraduate certificate in photography.